“The two most important requirements for major success are: first, being in the right place at the right time, and second, doing something about it.”

His name is Ray Kroc. Determined hustler who founded many projects. You have not heard of many of them as most failed rather badly. All of which however led him to the McDonalds brothers in 1955. When he got a phone call with an order for 6 milkshake mixers (he was a salesman for Prince Castle mixers considered a failure at the time). He visited the San Bernardino store in 1955 and instantly noticed the massive potential of a store that Richard and Maurice McDonald run. It was more than an efficient operation. The store was carefully designed for the workers to be able to deliver food in 30 seconds. An unthought of concept in the 50s! Not only that, the brothers have also carefully thought of the menu (only selling burgers, fries and milkshakes). 3 items on the menu! The simplification and production line approach led to great results with queues stretching around the store every single day.

“The two most important requirements for major success are: first, being in the right place at the right time, and second, doing something about it.”

Take It By The Horns

Kroc was fascinated by the McDonald's formula and believed it was a ticket to success. Kroc suggested they franchise their restaurants throughout the country. The brothers were skeptical, due to the failures they had in the past. Kroc offered to take the major responsibility for setting up the new franchises elsewhere. He returned to his home outside of Chicago with rights to set up McDonald's restaurants throughout the country. Kroc was a determined entrepreneur, he pressed hard and when everyone thought he is reaching limits he pressed even harder. The brothers were very protective over values they created and refused many of the proposed changes that Kroc was bringing forward. The relationship between the three of them grew very tense over time.

“If you work just for money, you'll never make it, but if you love what you're doing and you always put the customer first, success will be yours.”

With his big ambitions Kroc became frustrated with the brothers' slow growth approach. In 1961 Kroc offered to buy the brand and the amount of $2.7 million was agreed ($1 million after taxes paid to each brother) – plus an annual royalty of 1.9%. Kroc insisted that he could not include the royalties in official contract due to the relationship he had with investors who made the sale possible. He offered the royalties as a “handshake” agreement – to which brothers agreed. 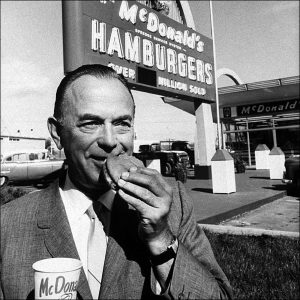 Bad Cop Or A Good Cop?

At the closing table, Kroc became annoyed that the brothers would not transfer to him the real estate and rights to the original unit. The brothers had told Kroc that they were giving the whole operation (including the land and property) to the founding employees. Kroc closed the transaction, then refused to acknowledge any royalty agreements as it was not in writing. Kroc also opened a new McDonald's restaurant near the original McDonald's (now renamed “The Big M” as they had neglected to retain rights to the name) to force it out of business.

“If any of my competitors were drowning, I'd stick a hose in their mouth and turn on the water. It is ridiculous to call this an industry. This is not. This is rat eat rat, dog eat dog. I'll kill 'em, and I'm going to kill 'em before they kill me. You're talking about the American way – of survival of the fittest.”

Ray in many aspects is an inspiration. He undoubtedly worked hard, he was determined and unstoppable. Where doors closed he climbed through the windows. If windows were shut he went for the chimney. Was he an inspiration or cold blooded rare entrepreneurial species?

“Achievement must be made against the possibility of failure, against the risk of defeat. It is no achievement to walk a tightrope laid flat on the floor. Where there is no risk, there can be no pride in achievement and, consequently, no happiness. The only way we can advance is by going forward, individually and collectively, in the spirit of the pioneer. We must take the risks involved in our free enterprise system. This is the only way in the world to economic freedom. There is no other way.”

If you would like to learn more and see the whole story unfold in detail I recommend watching “The Founder” (2016).

How to Deal with Depression: The Entrepreneur’s Silent Enemy